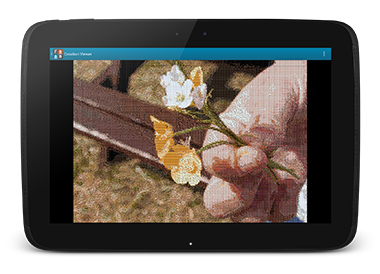 Using this simple yet powerful app you create photo grids that look like a single photo when zoomed out. It converts any photo of your choice (including a camera shot) into a large collage of smaller photos, typically your friends’ profile pictures. The resulting collage looks like the original photo from distance, but every little bit of it is one of the photos you choose. You may choose your tiles from either your phone’s storage or your friend list from one of the prominent social networks.

Your creations with Friend Brush normally have a resolution too high for the stock gallery app to display properly. However, you can view them in full detail from within the app, or save them to storage so you can transfer them to your computer and use them for other purposes. Applications range from as simple as making cool wallpapers for your desktop, to advertising. 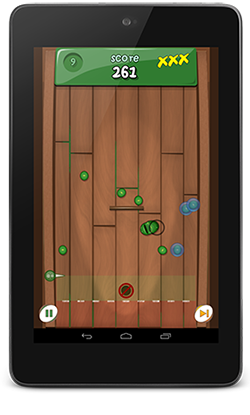 A simple physics-based game with strange characters, where you fight slime balls with slime balls! The game is simple. All you have to do is pull a charged slime ball back like a slingshot, and release it. This slime ball will explode after one second. The explosion will destroy nearby slime balls and kick back the ones further away. You must prevent slime balls from reaching the bottom line. Each slime that passes the bottom line has a penalty, which can be a life, a number of seconds, or a number of stars, depending on the game mode. As you reach higher levels, slimes start to come to life and eat other slimes. This can make the game harder as your slime can also be eaten by hungry slimes. This, along with obstacles and environmental phenomena that keep being introduced to the game, make the game more and more difficult and reaching high levels a challenge.

All effort has been put into simplicity as well as nice graphical presentation of the game. Apart from three game modes and different in-game features, the game supports Google Play games services and an in-game shop provides an exciting way to boost your slimes and enhance your game.

Hungry Slimes might seem frustrating or too difficult in the beginning. The truth is, it takes some time to get used to the mechanics and master the game. Once you learn the ropes, you can see the real joy the game can bring. If you have any questions regarding game play, please do not hesitate to contact us. 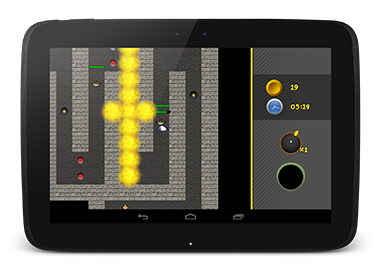 A bomberman-style arcade game with 36 levels and 6 bosses to kill. Some of our users identify our game as a “bomberman with a reason”! Your mission is to find and disarm the bombs in each level. You will end up in different labyrinths with different number of bombs to disarm. You should explode your way open until you find and disarm the bombs. There are different kinds of enemies and dangers in the game that make it challenging and joyful at the same time.

The game is suitable for people who like to play story-based games. Some levels can be lengthy, and your game data is saved only upon the completion of each level. So it might not be considered as a “time-killer” kind of game.